In late 2014, Sebatino Tartufi (an Italian truffle company) revealed to the world they had made an amazing discovery. In the backlands of central Italy, they had unearthed a truffle larger than any the world had seen before. The truffle they found was to set a new world record, and end up for tens of thousands of dollars.

The truffle Sebatino found was a Tuber magnatum pico also known as an Alba white truffle (Italian Winter White Truffle), which are known to be the most expensive truffles in the world. These truffles are only found in the Alba region in Tuscany and cannot be cultivated. In 2018, the wholesale price for 1 lb of white Alba was between $1,030 and $1,286. In 2017, prices were almost twice that at $2,000 to $2,500 per lb. At the time of its discovery, they were selling at a similar price – somewhere between $2,000 and $2,300 per lb. 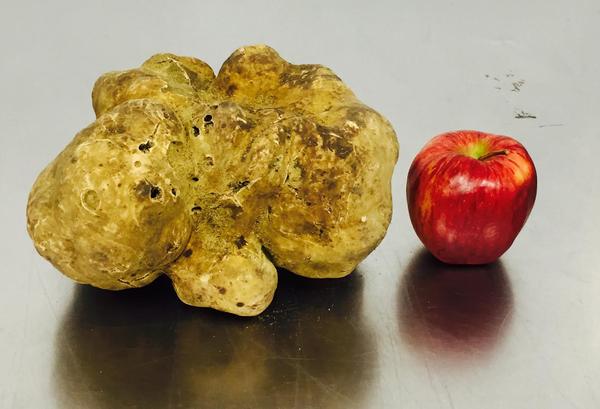 The final mass of world record truffle was staggering. Upon its discovery the truffle weighed in at 1,890g (66.66 oz), though a significant portion of this mass was water weight. When weighed a week later at the New York exchange, the truffle had lost approximately 7% of its weight due to evaporation. Still, the record-setting truffle weighed in at 1,786g (62.99 oz), the largest ever reported. To put this in perspective, the average white truffle weighs between 30-60g, meaning Sebatino’s’ truffle was more than 30x larger than the average truffle.

After finding the truffle, Sabatino released a press statement laying claim to the largest truffle discovery. Within hours, bids of $1 million USD were being placed. Cautious at taking these bids at face value, the giant truffle was flown to New York’s Sotherbys where an auction was held. Though much lower than initially expected, the giant truffle ended up selling for $61,250 to a businessman from Taipei, Taiwan.

Record breaking truffles are only found once every about every half decade or so. In 1999, a 1,310g truffle found in Buje, Croatia was the first to enter the Guiness Book of World Records. 8 years later in 2007, a 1,500g truffle was found in Pisa, Italy and later sold for $330,000 USD. 7 years laters, Sebatino’s truffle would only sell for $61,250 even though it was 20% larger than the previous record. Not bad for a large mushroom that came from the dirt.